2. The Industrial Licence applications so received in the Ministry of Defence are examined by a Standing Committee on Private Sector Participation in Defence Production and comments are then accordingly sent to licensing authorities.

3. The licensees are required to follow the Security Manual notified by the Department based on the product of manufacturing and their categorization for which an industrial license is granted to a company.

4. In accordance with the policy of ensuring ease of doing business, the Ministry of Defence constituted a committee to study and further liberalise the licensing process and review the list of items requiring industrial license from defence items. The decision of the committee was forwarded to Ministry of Home Affairs (MHA) and Ministry of Commerce & Industry, Department of Industrial Policy & Promotion (DIPP) for notification by them..

5. MHA vide notification dated 01.11.2018, had notified Arms Rules 2016 (Third Amendment) wherein it has notified that Firearms (Small Arms and ammunitions and allied items of caliber upto 12.7 mm) and their following parts only are  licensable under Arms Act, 1959/Arms Rules 2016:

6. Further, MHA vide notification dated 14.12.2018  in supersession of their earlier notification S.O. 1636(E) dated 19.05.2017 had revised the schedule of items requiring Industrial licence under delegated powers to Secretary (DIPP) under Arms Act/Arms Rule according to which “Tanks and other armoured fighting vehicles” and “Arms and ammunitions and allied items of defence equipment; other than small arms of caliber 12.7 mm and above” are only licensable under Arms Act, 1959/Arms Rules 2016”.

7. The other defence items viz. “Defence Aircrafts” and “Warships of all kinds” now de-notified from Arms Rules 2016 due to their non-coverage under the said rules has been notified by DIPP vide Press Note 1(2019 Series) dated 1.01.2019 along with other licensable defence items under I(D&R) Act, 1951. The list of defence items which now falls under the I(D&R) Act, 1951 may be seen under the said press note. The above press note also covers items referred to in para 6 above for greater clarity of industry. . 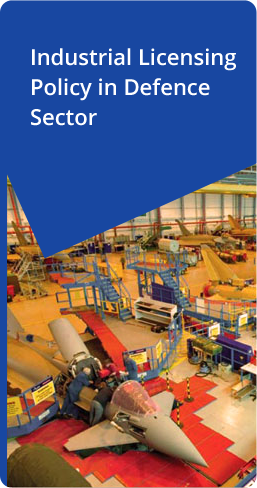